Ever dreamt of having sauna or steam room experience without having to leave your home? Well, the answer to your desires might be a sauna shower combo!

A sauna shower is a big investment, so you really don’t want to make a mistake. With this in mind, if you’ve been struggling to find the best sauna shower combo for the money, then this post may be able to help you.

To start off, we’ll showcase 5 units that we think have the optimal features for the price asked. We’ve tried to pick very different sauna showers to ensure variety and hopefully meet the needs of many people.

The Mesa 803L 2-person steam shower seems like a good option for 2-person use. This thing is roomy, and it has everything you’d want for 2-person shower sessions.

For steam generation, the 803L steam shower features a 3kW steam generator that should be able to deliver steam in minutes. Aside from that, you are getting 12 massaging water body jets, which should be enough for 2 people and probably more than enough for solo showers.

The 803L shower also features 2 adjustable shower wands and fold-up seats for added flexibility. Interestingly, this thing has FM radio as well, which may matter to some people.

What might additionally interest you is that this shower is compliant with ETL and CSA standards. This may matter to you depending on electrical appliance requirements in your area. 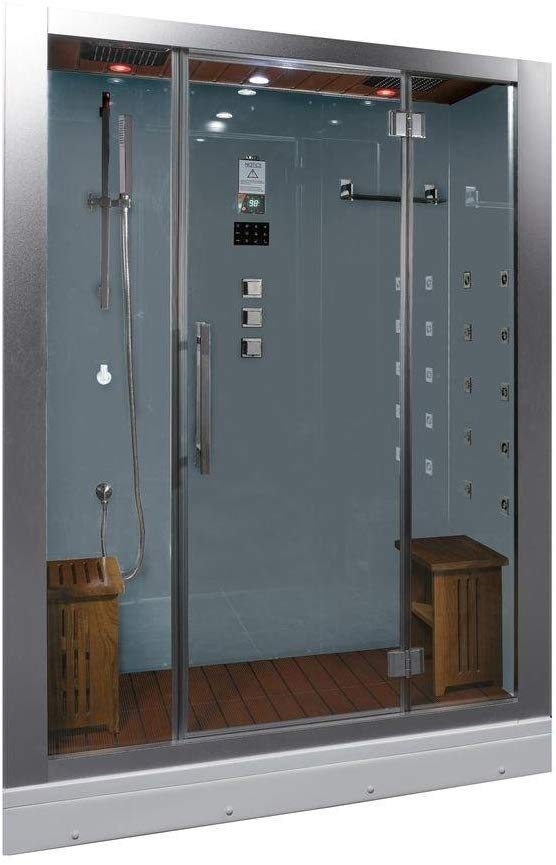 If you are ready to pay the money for an excellent steam shower experience, then the Platinum DZ972-1F8-W8 shower by Ariel might be the right option. This thing has everything you’d want from a steam shower, starting from a powerful steam system and ending with entertainment features.

The steam generator here is powered at 6kW. Of course, it will consume a lot of electricity, but it will be able to deliver steam very quickly.

What might also interest you is that the Platinum steam shower accommodates 2 people. Not only does it accommodate 2 people, but it also comes equipped for a pair – more importantly, this steam shower comes with 2 wooden stools and 2 showerheads.

To ensure more effective relaxation, this steam shower also has 20 body massage jets. Aside from the 20 jets, this sauna steam shower features an aromatherapy system and chromotherapy lighting. For entertainment, it has FM radio as well.

Notably, this unit also has a built-in ventilation fan to allow you to dehumidify your bathroom a little bit quicker.

All in all, the Ariel Platinum steam shower seems like a great steam shower if money isn’t an issue for you. And we do mean it – this thing is pretty expensive. 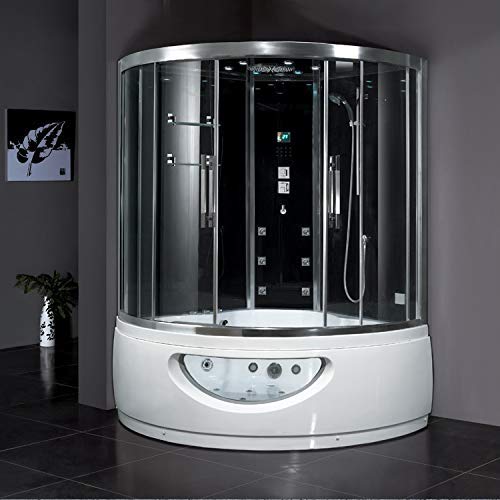 The Ariel DA333F8 Platinum steam shower is probably one of the most ridiculous steam showers out there. And we don’t mean this in a bad way. Rather, this thing is over-the-top functional.

The first thing to catch the eye in the DA333F8 steam shower is the whirlpool tub with 6 whirlpool jets. So you are essentially getting a shower and whirlpool bath two-in-one.

Interesting things don’t end there. Another feature that the DA333F8 steam shower boasts is precise temperature control. Thanks to its temperature sensing ability, this shower is claimed to precisely maintain the selected temperature. If this feature works reliably, then you should never have to deal with too hot or cold water again.

For added therapeutic benefits, this sauna shower also has aromatherapy and chromotherapy systems, as well as FM radio. All this is controlled via the integrated touchscreen control panel.

But what about the steam capabilities of the DA333F8 shower? Well, things aren’t as good as they could have been.

You are getting a 3kW steam generator and 6 body jets for massage. The steam generator should be more than powerful enough to deliver steam quickly, but 6 body jets is frankly not that much, especially given the huge size of this thing (59 x 59 x 89 inches).

These aren’t deal-breaking downsides, and you won’t necessarily benefit from 20 jets. But it would be nice to have a little more flexibility, especially for the price. 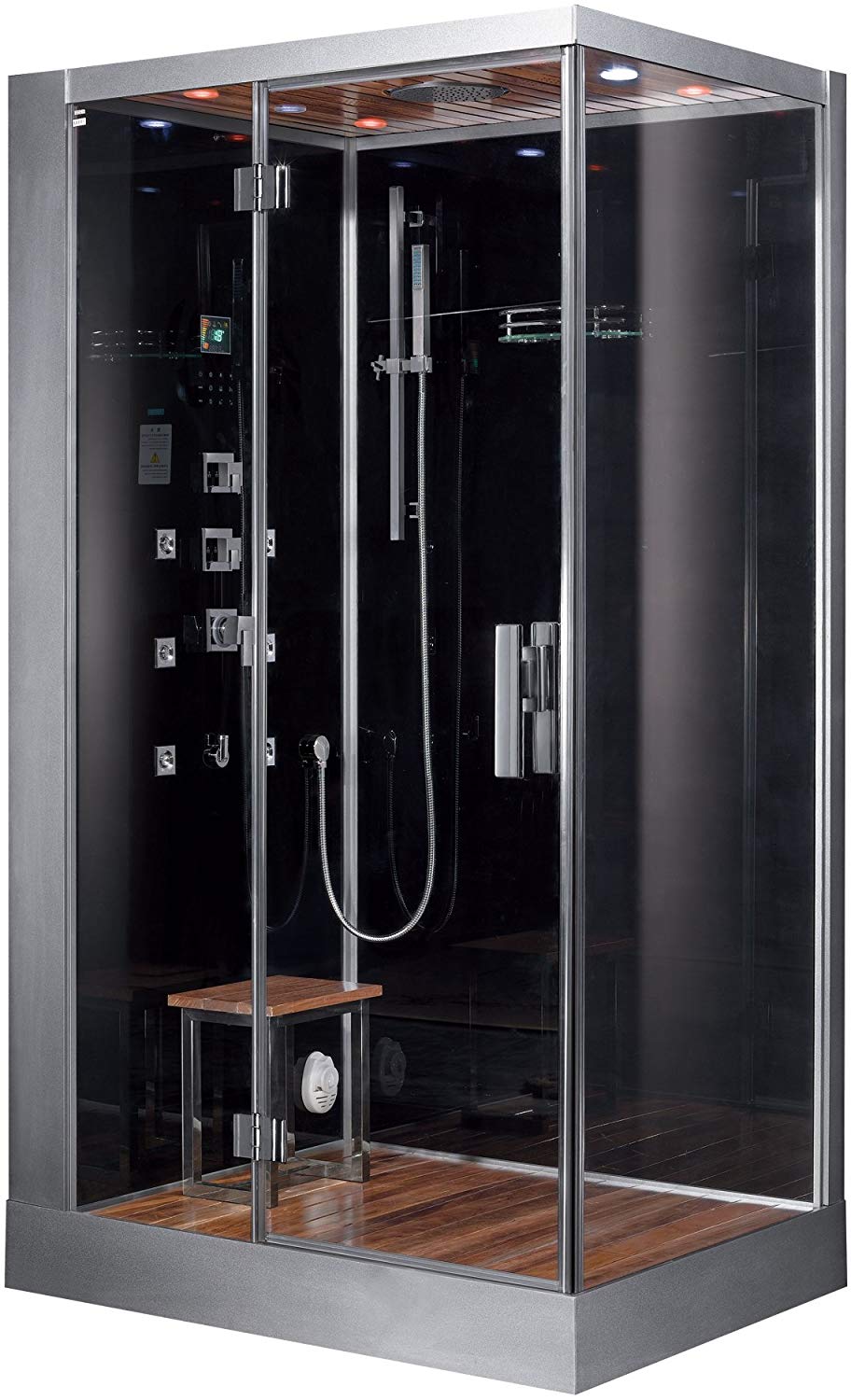 Next, we have the Ariel Platinum DZ959F8-BLK-L. To keep things simple, we’ll call this shower Platinum, but don’t confuse it with the previous Ariel Platinum shower (the one in the second spot).

Although this steam shower is very functional, it doesn’t have the wow-effect that the previous Ariel showers offered. That’s probably because the other 2 showers boasted a lot of things, perhaps even too much for a steam shower.

So anyway, this Platinum shower offers a powerful 6kW steam generator that is claimed to produce high-temperature steam within just 2 minutes. In regard to steam production, this shower should be similar to the previous Platinum steam shower.

What holds this shower back a little is the number of massage jets – just 6. Had this thing had more jets, it would probably deliver massing experience on par with the other Platinum unit.

For enhanced relaxation, this steam shower also has the familiar aromatherapy and chromotherapy systems, as well as FM radio.

In the end, though the Platinum steam shower certainly isn’t the most remarkable unit on our list, it probably is one of the more balanced options available out there, both price- and feature-wise. 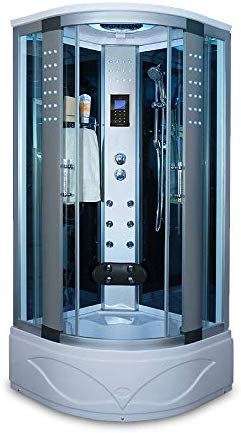 And as the last sauna shower on our list, we have the 8004-AS shower by Bath Masters. We’ve seen a lot already in the previous showers, but this thing still has a few interesting features to offer.

So, how about a foot massager? Or maybe a tub that can be comfortably used to bath kids or pets? The tub, to be fair, is kind of small and won’t accommodate adults, but it might be a nice feature to have for your needs.

The digital control system of the 8004-AS shower is notable as well. Among many other things, this system allows you to set a timer, control the temperature, and set the integrated FM radio to your favorite station. Remarkably, this sauna shower also has a phone call receiver, allowing you to answer incoming calls without reaching for your phone.

Steam-wise, the 8004-AS shower has a 3kW steam generator, which should be great for its compact size (36 x 36 x 82-3/4 inches). This sauna shower also has 6 massaging jets, which is good, but not nearly as good as in a few other showers on our list.

One thing to keep in mind with this sauna shower is that its stock tubing is weak, so you may want to replace it. Honestly, it’s weird that sellers don’t include better tubing in the first place, especially given how much money you are paying. But with the other advantages of this sauna shower in mind, this might not be a big issue for you.

What Is A Sauna Shower?

So what’s a sauna shower in the first place?

To keep things simple, we’ll refer to all these showers as sauna showers from now on.

Sauna showers have one distinguishing feature – an integrated steam generator. The steam generator heats water to boiling and then delivers the produced steam into the shower cabin. The shower cabin is sealed to prevent steam from escaping and allow you to enjoy the full benefits of the session.

But what’s the benefit of such a shower? Well, steam is thought to have many health benefits:

Are Sauna Showers, Saunas, And Steam Rooms The Same?

Another thing we should briefly cover is the differences between sauna showers, steam rooms, and saunas. To put it short:

A sauna shower more or less combines the features and benefits of the two types of heat therapy, though it’s more similar to a steam room. With that said, the air in steam rooms is actively heated to 100-120 degrees Fahrenheit, while steam showers usually do not heat the air directly.

So even though sauna showers have the word “sauna” in their name, they are actually much more similar to steam rooms than to saunas. Due to this, calling this type of shower “steam shower” makes more sense, but some sellers market their products as “sauna showers”.

So no, a sauna shower – unless it heats up the air up to 200 degrees – won’t replace a sauna. With that said, a sauna shower might deliver an experience similar to wet saunas where the temperature is lower and humidity is higher.

Things To Look For In The Best Sauna Shower Combo

Now that you know what to expect from a sauna shower, let’s talk about a few important things that you should be paying attention to when shopping for a sauna shower combo.

First and foremost, check the size of the shower. This is important because the shower should fit in your bathroom. Besides, size is a matter of comfort, so you may want to get a bigger sauna shower.

Sauna showers usually come in standard shower sizes, but you should check the size of the desired shower anyway just in case to make sure that it will fit in your bathroom.

You should at least get a sauna shower that can satisfy your most basic needs. On the other hand, you shouldn’t overpay for features that aren’t essential to you. It’s sure nice to have things like aromatherapy or FM radio, but if you don’t need those, don’t overpay for them.

Jet number & location
Sauna showers also typically have massaging jets situated throughout the shower walls. The number and positioning of the jets differ from sauna shower to shower.

We think that the number of jets is less important than their location. 20 badly placed jets will not be as effective as 6 perfectly placed massaging jets. So first and foremost, pay attention to where the jets are mounted in the shower. If you want the jets to hit your back, then look for a shower where the jets are placed higher.

3kW seems to be a standard wattage for steam generators included with sauna showers. With most showers, this number should be more than enough.

However, for big showers, you may want a more powerful steam generator that would produce large amounts of steam quicker. But do keep in mind that powerful generators might increase your energy bill.

Sauna showers typically have at least FM radio. More advanced showers may also have audio input, allowing you to plug in your phone or laptop and enjoy your own music library. You might also be able to find sauna showers with an integrated TV, but this feature typically is only available in very pricey sauna showers.

If the sauna shower has a tub, then again make sure that it’s bottom is slip-proof.

Waterproof components
Believe it or not, but sauna showers may have components that aren’t waterproof. These may be small parts like bolts or large parts like door frames.

Not every manufacturer will let you know whether their showers are fully waterproof or not. To find out for sure, you may check buyer reviews – if there have been any issues with rust, then you will know about them.

Operating voltage
Finally, check what voltage the desired sauna shower combo operates at. Usually, sauna showers require 220V. For US residents, this might be a problem since you will need to hire a contractor to set up 220V for you.

Is a sauna shower a good alternative to sauna sessions? Not exactly – as explained above, sauna shower combos are more similar to steam rooms than saunas.

Is this a problem? Unless you want true sauna experience, no. As mentioned above, sauna showers will deliver sensations similar to wet saunas, though they won’t be exactly identical. If you want to take sauna at home, look for an indoor/outdoor sauna instead.

In the end, hopefully, we’ve given you enough insight to allow you to easily find the best sauna shower combo for your needs!

SaunaRide.com is a participant in the Amazon Services LLC Associates Program, an affiliate advertising program designed to provide a means for sites to earn advertising fees by advertising and linking to Amazon.com